Currently if formation arrives into destination and member goes to IDLE only after reaching the offset.

Problem with not sending failure message for member which is likely stucked because of obstruction, is that in case offset is on position of that obstruction, member never leaves walking state however is appearing like idle, because of movement animation handling by movement component itself introduced in rP22446, what was not bad decision by itself, but it hides units not leaving in walking states.

Main problems with this are units spamming unitmotion trying to get to the goal and they will never move there and units not entering IDLE state, so they never respond to enemies around or injured fellows that need healing.

Solution in this patch is to fail if formation is not going to move and unit cannot reach destination.

Steps to reproduce:
Most likely to happen more often during game: Form bigger formation around stone mine or something similar.
Kind of extreme case: Form formation right after start with units at opposite sides of cc.
Use developer tool display selection state to confirm real state of the unit.

Showcase of patch:
All units at picture are in idle state, even they should stay at the places where obstruction is so they cant. 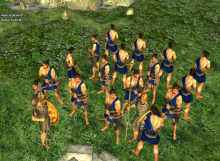 I tested it and couldn't break it ;)
Even when obstruction is removed, the formation members go to their correct position.