Campaign implementation for Single Player.
Provides a basic architecture for creating campaigns, loading them, and running them via scenarios that get enabled "façon Age of Empires 1".

These campaign scripts should be somewhat SP/MP agnostic, though they're using the SP gamesetup for now.

Campaign-specific GUI files reside in /gui/campaigns
Campaign templates in /campaigns
Some common files have been put in /gui/common/campaigns, to avoid /common becoming too large. These are included in the main menu and in session.
There is a custom session file in /gui/session/campaigns for convenience.

Further work on the gamesetup is probably required. I would like campaigns to have their own subfolder in "maps", ideally, or perhaps in "campaigns/[yourcampaignname]"

Possibly for a V2 implementation:

Screenshots (bear in mind, this is ugly & functional on purpose. I do think a v2 nicer version could be worked on after this is committed).

Answers to some comments.

As a reminder of what we're trying to achieve here: the goal (to me) is not to provide something beautiful, or even something complete, but rather a necessary, minimal, and well-architectured stepping stone for other code. As the patch stands, it is usable for a very basic campaign, though it's missing plenty of things one would want, but I think that's fine, we can add those on top of this core stuff, so long as the general direction of the core stuff isn't stupid.

Complete rewrite of the patch (bar the simulation/session bit which I haven't looked at yet).

This introduces a similar OOP style as the rest of the code, moves files around in new folders, renames plenty of things.
I reckon the OG patch had pretty poor separation of concerns.

Most of the above comments are now irrelevant.

This also introduces a super-magical way to do rendering updates, because I like being lazy and magic.

At this point, I also need to look harder at the new gamesetup.

This implements some basic handling of game ends via a common file in session/campaigns.

Campaigns may or may not autostart (Ideally, most settings would then be frozen). Campaigns may skip the summary.

The campaigns now register that the player has won a scenario.
Bunch of other tweaks.

See TODO above for list of things to do.

wraitii updated this revision to Diff 11967.May 22 2020, 9:56 AM
wraitii edited the summary of this revision. (Show Details)
Comment Actions

I need to do a small cleanup pass on my this.identifier/this.filename business.

Add some screenshots of the very basic interface to the summary.

Okay, so the normal campaign is currently broken. (So that obviously needs to be fixed)
https://upload.jabberfr.org/qmJ8LfmtvdhWLl1h/Bureau.mp4

I tested the normal introductory one, it seems to work, you win quickly and then it unlocks the next mission. Quicksaving seemed to work there (No reason why it would not)
Saving however is a bit strange, since you don't see the other savegames when in the campaign menu, but you do see them when in game, probably needs some code there if that savegame hidness is intended

The campaign menu is a bit crowded see 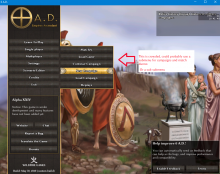 The first popup feels a bit strange, as you don't know what you are expected to do, if it is to stay there should be a nice description 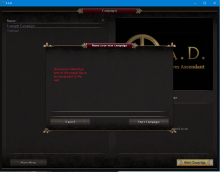 The quit popup is pretty scary, how can it dare saving all my campaigns 🗡 The scenario unlocking seemed to work. It'd be nicer if it was a map, but I guess that's harder to do.

Some warnings popped up as well